We’ve decided to split our Auction Results and Analysis into two parts to keep the posts manageable and easier to read. This post covers SLs only, Part II I will cover Coupes and Convertibles, Sedans, SLR / SLS / AMG GT, and all other models (Pre-War, wagons, customs, etc.).

As a kick-off to the annual collector car calendar, Arizona continues to hold an important position. Unlike other big events on the collector car calendar (Amelia Island, Pebble Beach, Hershey) there is no concours event held in conjunction with any of the Arizona auctions (for now) and there is no race track hosting vintage racing events. It’s nothing but a massive sell-a-thon, or ‘shopping spree’ depending upon which side of the transaction you’re on. Led by Barrett-Jackson in total volume (of sales dollars and number of cars),  there are 6 other auction houses, with their own personalities and collector car offerings vying for the public’s attention. It makes for an action packed week that has come to be known simply as ‘Arizona Auction Week.’

We’ve watched 300 SL prices cool off ever since the highs of 2014 and 2015. We’ve seen 300 SL average prices decline for the past three years in Arizona and this year, three of the cars offered were sold under $1,000,000, that’s hasn’t happened in a long time. Just a couple of years ago every basket case, needs everything, barn find was selling for over $1,000,000. While that can still happen, given the right car with the right history, it’s not commonplace. I heard grumbling among 300 SL fanciers in Scottsdale that ‘the quality is down’… and hence the prices? Maybe, but the money paid seemed fair to me in most cases.  The Strawberry Red Metallic Roadster at RM Sotheby’s sold for $973,000 which surprised me. It had a two owner history with the first owner being a well known car guy, with a car museum named after him in Michigan even, an original interior and charming two tone paint scheme with the cream hard top. I thought that car would have sold for more money (as per my ‘prediction’ – see below). Somehow I predicted the sale of the silver Gullwing at RM Sotheby’s to the dollar! A color change, but the color combo of silver with blue tartan interior is one of the most iconic and always gets hearts pumping.

They call the 300 SL the ‘Gold Standard’ of the collector car world… the prices realized (and high bids refused by sellers) show us that sellers, most of them anyway, have accepted the new normal in the market and are letting their cars go for correct market money. For those who bought their cars 10 or more years ago, this is an easier pill to swallow than for those who bought their 300 SLs in the last 5 or 7 years.

The 1959 190 SL offered by Leake, part of the Staluppi Collection (photo courtesy of the auction company).

There were just four 190 SLs offered across all seven Scottsdale auctions this year, Kenny Roger’s ‘Gambler’ comes to mind when thinking of the 190 SL Market. Now is probably a good time to hold onto your 190 SL. We’ve seen this market swing high and swing back low over the past 5-7 years. The 4 results here were strong for 190 SLs today but it wouldn’t surprise me if the owners of these cars didn’t have many more tens of thousands of dollars ‘in them’ if they were the ones paying for their restorations over the past few years.

Don’t feel too bad for 190 SL owners though. Really nice 190 SLs were $50,000 or $60,000 cars just ten years ago, drivers were hard to sell at $35,000 (believe me, I tried). While prices have come down, they’re still double what they were. Fewer showing up at these auctions is proof sellers just don’t believe they would see a good result and thus, didn’t bring them out. There are also, arguably, much better, much less risky, places to sell a 190 SL that didn’t exist just a few years ago… more on that from Mercedes-Market soon.

I’ve been asking this question for years. If you insist on selling your Pagoda at auction your best bet is to try to get your perfect, over the top restored (or perfectly documented original) car into RM Sotheby’s or Gooding and Company’s sale consigning anything else, anywhere else is likely to be a disaster, it can even be a disaster at these two auction houses. If they accept your car, they will do so with a ‘no reserve’ stipulation only. Now you’re at the mercy of the auction company for ‘good’ lot placement, whatever that means exactly. In short… if you take your Pagoda to auction you’re rolling the dice AND you believe that it’s a special enough car to bring a significantly higher price than if you were sell it on the private market. And you’ll need that bigger price to afford to pay the auction company (12% now, on amounts under $250,000)… not to mention prep and shipping. Back out the buyer’s premium on the sales of Pagodas in our list here, then you have the hammer price, now back out the seller’s fee and see what you’re left with… what the consignor took home. Do you think he (or she) is happy with that number? Would you be?

From the point of view of a buyer, there are well over 100 Pagodas available for sale on the private market at any one time. Quality is all over the map, so you really need to do your homework and decide what kind of pagoda you’re looking for (type, condition, options, etc.). Talk to the owner, have the car inspected, drive it, learn the history. If you do those things, chances are you’ll be much happier with the car you end up with, whether you choose to buy a 280 SL that costs $45,000 or $100,000 (in the past year I’ve sold 280 SLs for as little as $43,000 and as much as $96,000 privately).

Just like the W113, R107s don’t make much sense at a big auction, quite simply, the costs and commissions involved are just to big to make it worth it. Sometimes in AZ we’ll see an exceptional, low mile, time capsule 560 SL at one of hte big auctions bring lots of money, but these days, you can achieve the same result on Bringatrailer without all the expense and the risk of a ‘no reserve’ offering. As a result, this year, all the R107 cars we saw in Arizona were just ‘used cars’ – nothing approaching true collector grade.

Last Fall, through Tobin Motor Works, I sold a one owner, 1988, original paint, California 560 SL that was Signal Red with Palomino leather with just 11,842 miles. After spending about $5,000 on service work (yes, even the low mile cars need to be maintained, especially the low mile cars) it sold for $62,500. Had I taken it to auction, it would have had to ‘hammer’ for at least $70,000 in order to net the $62,500 realized… meaning, the buyer at auction would have had to pay closer to $80,000.. not likely. And this is why we aren’t seeing such cars at the big auctions. The cars that did show up were mediocre examples, some from private parties, some from dealers hoping to hit it big. A quarter of them didn’t even sell at the high bids listed below. There are just too many other places to buy and sell these common cars.

R107 prices vary greatly based on the actual model with 560 SLs and 500 SL Euro spec cars being the most desirable. While prices for great examples (low miles, say, under 30,000, limited # of owners and original everything) have really surged, ‘drivers’ are readily available in the mid teens. Don’t pay attention to the delusion asking prices in the back of the MBCA’s Star Magazine… talk to someone in the industry if you want a decent driver for under $20,000, they’re out there.

R129 Finally Starting to Receive Their Due, but Not in AZ 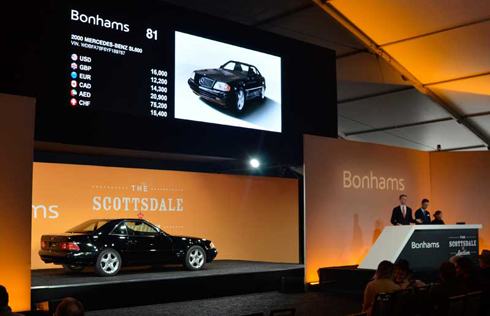 Same as with the two previous categories… These auctions aren’t a great venue for these cars, yet there were a handful available. There weren’t any exceptional ‘time capsule’ R129s offered this year. Bonham’s worked hard to sell their 12 cylinder example for just under $18,000.

Enthusiasts are beginning to open their eyes to the R129 for the solid cars that they are. For that younger generation of enthusiasts the R129 is one of the cars they coveted when they were in high school and they’re a perfect car to attend a RADwood event with. Older enthusiasts see them for the solid cars that they are. Worlds ‘better’ than the R107 they replaced, they’re modern enough to be easy and comfortable for long drives. Great examples can be found under $15,000.

That’s right, 34 of this generation SL to choose from, the most in any one year since I’ve been keeping track. I must admit, after seeing 25 of these offered at the Arizona auctions  in 2018 and seeing the money low mile cars were bringing, I went out and found a 32,000 mile 2003 designo Launch Edition, bought it, incurred a couple of thousand dollars in expenses and sent it to the Barrett-Jackson Northeast sale in Connecticut that June where it sold for $21,450. That means it was a $19,500 hammer price, less 10% seller’s premium means $17,555 NET to me. About a break even proposition. Barrett-Jackson is the big winner in all of this, but we knew that already, right?

It seems a lot of other folks had the same idea this January. There are lots of these cars available on the market and can be purchased, wholesale, pretty cheap and flipped for a profit, if they’ve been well maintained and don’t have any problems. On the other hand, an auction like this may very well be the place where someone tries to pass off a car with issues on an unsuspecting buyer. I do think a good deal could be had on the right R230 at auction, but I’d suggest taking a scan tool to plug into the car during the preview, running a Carfax (amazing how many cars don’t have them in their history folders, if there is a history folder with the car at all) and having a friend at a Mercedes dealership pull the VMI (Vehicle Master Inquiry) for you to look deeper into the history of the car and what has, and has not, been done to it.

As the collector car landscape evolves, it will be interesting to see how the ‘big auction houses’ adapt to new competitors like Bringatrailer, Hemmings Auctions (no threat yet) and super niche players like PcarMarketcom (essentially, bringatrailer for Porsche only offerings). The most expensive blue chip cars will most likely always have a home at these high risk / high reward venues, but for more common cars, the W113s, R107s, etc. These alternatives may really make a dent. We’ll see.

Mercedes For Sale at Barrett-Jackson Scottsdale 2018 –...

Mercedes-Market: Your Guide to Buying, Selling and Collecting Modern and Classic Mercedes. 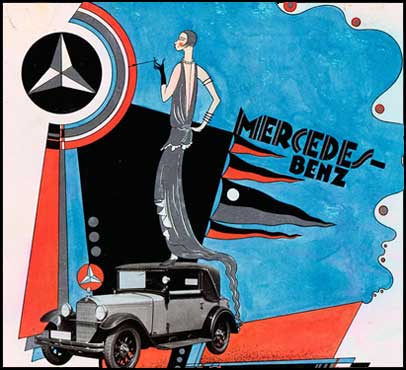 Click to learn about this valuable resource and how you can help build it by submitting your photos!

Based in the Finger Lakes Region of Upstate New York.