Mercedes-Benz introduced the R230 chassis SL for the 2003 model year in the United States, the first SL class with a retractable hard top. Mercedes calls it the ‘5th Generation’ SL (300SL – W198, Pagoda – W113, R107, R129 and the R230). 7 years after the introduction of this new R230 body style it was time for a facelift, 2009 was the first model year for the lightly massaged R230 SL the car we’ll go over in this article. We’ll concentrate mainly on options and equipment, but a brief overview of some of the changes from the earlier models is important as we explore the 2009 Mercedes SL 550.

The front and rear bumpers were changed, think, any plastic parts below the hood and front fenders. Depending upon the trim / option package, a couple of different looks were available. The rear bumper was also changed, as these plastic bits are easy to work with. The front grille was also redesigned, along with the headlights, now, much more angular than the previous look. Add to that slightly flared front fenders, but perhaps most significant and noticeable change about the 2009 and later R230 cars is the hood. Starting in 2009 the hood got a couple of raised ridges running from front to back, coupled with the new grille, head lights, fenders and front bumper, to my eye, these cars appear significantly more aggressive and sporty than earlier R230s.

The interior of the car doesn’t look any different, seats, most controls, remain unchanged. AIRSCARF was new for 2009, fans built into the heardrests that could blow warm (or cool) air on your neck, supposedly extending the top down motoring season into the Fall a few weeks while still keeping you warm, if the windows are rolled up. It sounds like a gimmick, but it’s not a bad option. It gets a little too hot for me sometimes, but it’s there if you want it. 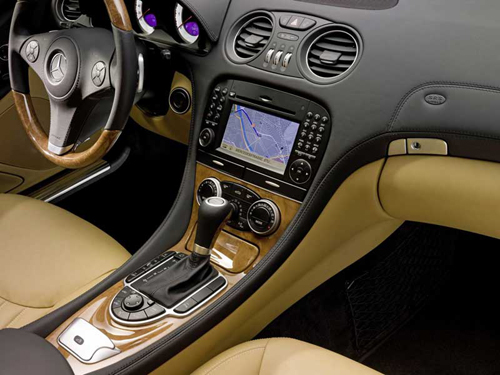 One of the best things about the 2009 SL 550 was the new COMAND system. Mercedes introduced a new COMAND system in most models across the product line in 2009. The navigation, Bluetooth and music options were vastly improved over the old system. It isn’t something that you necessarily notice when you peek inside the cockpit, but the later cars are MUCH easier to live with due to these better electronics. You get a 4 GB music register – meaning you can burn CDs into the car’s memory, lots of CDs, it has a 6 disc changer in the dash, you just feed 6 discs into the slot one after another. There is an SD card slot where you can insert an SD card full of music for more listening options and there is an aux jack and iPod connector under the armrest, it was also the first year for the USB music option, plug in a USB drive full of MP3s and start listening. Bluetooth capability is built in, no longer do you have to plug in a separate ‘Bluetooth Module’ (to the tune of another $500 with the MB parts department!) into the armrest in order to make your phone work (like you did with any MB model previously)… it’s all built in. Bluetooth streaming music wasn’t available in 2009, it would be 2012 until that arrived in the new ML class and then into other models. 2009 was also the first year I think they got VOICE CONTROL right. If you can figure out how to use it and stick to the rules, it’s a solid, convenient system for some basic tasks.

$98,500 Base MSRP (does NOT include $875 destination and delivery car which is a line item on every window sticker, so $99,375 is really more accurate). Add the fact that ‘base’ cars simply do not exist in dealer inventory, they all got some options, and who would want to special order a ‘Base Betty’ SL 550? They essentially all had price tags over $100,000 when new.

AIRSCARF – Heated or cooled air via the head rest.

While most Mercedes Classes carry a $700 – $750 up-charge for metallic paint, the SL class does not, with one exception. In 2009 there was an additional cost of $795 for Diamond White Metallic paint. Storm Red and Capri Blue cars were not available with red interior.

All SL 550s came with standard leather interior, MB Tex (Mercedes’ proprietary vinyl material), was not an option. The “Trim Package” (see above) included the Premium Leather option, available in the same 4 colors above, just a slightly higher quality leather.

Notice that SL interiors are two tone, except for black interiors, if the chosen interior color is black, everything is black. Upper panels on the doors and dash are a darker color to reduce reflections of the interior on the inside of the glass, ensuring better visibility. They think of everything, don’t they?

The other Special Edition SL 550 that was available in 2009 was the Silver Arrow Edition. Just 550 ‘Silver Arrow Edition’ Cars were built worldwide. Each had a plate on the ash try cover stating “SL 550 – 1 of 550 – Silver Arrow Edition” So, when you see that tag, you’re not looking at car #1 of the 550, they all received the same badge, they were not sequentially numbered, although that would have been more interesting.
The Silver Arrow Edition cars were painted with “Silver Arrow Paint” – a metallic silver that appears to have larger metallic flakes in it than the standard Iridium Silver offered on other cars in 2009, with Premium Red leather interior. On the window stickers the package was called the ‘Launch Edition’ and it carried a price tag of $13,725 and included various options including designo Black Piano Laquer wood and the Panorama sunroof among other options. We’ll do an article devoted to that particular R230 soon, as they’re great looking cars and probably have the best chance of future collectibility because they have something that differentiates them from other R230s.
R230 2.0 – An SL for Today and the Future
The market remains decently strong for these later R230 cars, they demand a significant premium above the earlier cars. Visually, the updated R230 SLs from 2009 look sportier and more aggressive than the cars that came before them, but the enhancements aren’t just skin deep. Meaningful changes to the electronics that you interact with constantly of a driver of one of these cars makes them, in my opinion, better than the R230s from 2003 – 2008. There were no SLs for model year 2010, strangely enough, in the spring of 2009 Mercedes-Benz alerted dealers that they would sell remaining 2009 inventory through the 2009 calendar year and starting in 2010 they would sell 2011 models, which were unchanged from the 2009s. This ‘face lifted’ body style would continue through the 2011 and 2012 model years until the 6th generation SL, the R231 was introduced for the 2013 model year.
As we’ve seen with the R129 model SLs in the market, as they’ve ‘come of age’ and as collectors look to snatch up the best, original examples, value lies in cars that are different from the others. Unique color combinations are good. Chances are the designo models will demand a premium in the future, all else being equal, but even better are the special edition cars, the Silver Arrows. We don’t have any production number information for the designo package cars, but it’s safe to say that there are probably more Silver Arrow cars, 550 of them, than there are designo Graphite Edition cars, but it probably doesn’t matter, rare doesn’t always equal more valuable. Any time Mercedes commemorates their past with a car, even if it’s just a special color combination or mileage package, it differentiates that particular example from the others, just enough, to make it more desirable. Just like the R129 Silver Arrows are appearing to be the ‘ones to have’ the R230 Silver Arrows will probably follow the trend for collectibility in the future.

What’s That Plastic Strap in the Trunk of My Mercedes?

Mercedes P1 Package vs. P2 Package in the...

What color is your 09 SL….ive been snooping for white/stone…heavy loaded..illum door sills etc…I sort of like the looks of 09 better than 13

Click to learn about this valuable resource and how you can help build it by submitting your photos!

Mercedes-Market: Your Guide to Buying, Selling and Collecting Modern and Classic Mercedes.

Based in the Finger Lakes Region of Upstate New York.